The origin of Sake can be traced back to fermented rice beverage brought to Japan from China by the third century B.C.. Since then it was evolved into unique and sophisticated alcoholic beverage which has become culturally significant for the Japanese people.

Although Sake is brewed only from rice, it offers a wide variety of tastes like wine. There are supposed to be more than 2,700 breweries all over Japan, and each brewery uses different Sake-brewing rice, Koji mold (yeast), and water (either spring water or filtered water) in its own unique brewing method. There are also differences distinctive to each Sake-making region in Japan, adding more complexity to the world of Sake. To better appreciate Sake, one needs to know that it is divided into four major categories: Daiginjo, Ginjo, Junmai, and Honjozo. 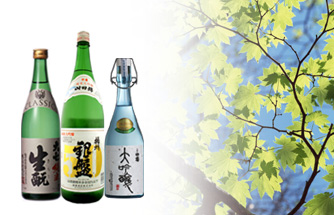 Prized as the top of Japanese Sake, Daiginjo has a very light, fragrant, fruity and subtle taste. It is brewed with rice whose each grain has been polished away by 50-65%, and the various brewing processes are handled with greater care and attention. Serve chilled or at room temperature.

Ginjo is Sake brewed with rice whose each grain has been polished away by 40-50%. Like Daiginjo, the flavor of Ginjo is light, fragrant and even complex. Serve chilled or at room temperature.

Brewed only with rice, filtered water, and Koji mold, Junmai Sake is in general full-bodied and slightly acidic. It goes well with a wide variety of food. Serve at room temperature or hot.

Honjozo is brewed with rice, filtered water, Koji mold and yeast. The grain of rice is polished by more than 30%. A small amount of alcohol is added in the final fermentation process. Dry and smooth, usually lighter and more fragrant than Junmai Sake. Serve warm or at room temperature.

In addition, there are other varieties such as Nigori, Nama, and Ume Shu. Nigori Sake is unfiltered, subtly sweet, and its texture has a white, cloudy look. Nama is draft Sake, not pasteurized, and has a fresher and lighter flavor. Ume Shu is sweet plum wine served as an aperitif or dessert wine.

In the trade of Sake, its taste, either dry or sweet, is determined by Sake Meter Value (Nihonshu Do). Adding to it the value of acidity, you will get what's called Total Perception Chart for more accurate evaluation of what Sake tastes like. For more detailed explanation, go to the following page.